If you’re a woman in America, you’ve probably eaten your feelings before. We see this unhealthy habit in the media all the time: women diving into a pint of ice cream after a break-up, heading straight for Krispy Kream after losing a job, or stuffing their faces for no reason other than boredom or depression. Now men can be/ are guilty of this as well, but I can only speak from a woman’s standpoint, and we usually see women fall prey to this particular monster. I, myself, frequently battle this button-busting beast. The most recent encounter was a box of Munchkins from Dunkin Donuts after I learned that my favorite band, Fall Out Boy, was probably breakign up for good. (Even though all four members say it’s just a hiatus and no one knows the future of the band, they’re all so happy with their individual projects. And they weren’t happy in FOB anymore. I wish they’d just say it’s the end instead of giving fans false hope, but this is a rant for another day.) I walked into Books-A-Million with the box and slapped people’s hands away when they tried to share my mourning munchies. Now usually, I’m all about sharing my food, but on this day, I declared that I was eating my feelings and that my feelings were glazed and cinnamon. Chocolate feelings were open to anyone because I have a strong aversion to the flavor for some reason. My dislike for chocolate is probably a blessing considering how often I indulge my feelings with food. My comfort foods? In order of preference: steak, mac’n’cheese, ice cream, chinese food, donuts, and other sweets like Starbursts or Twizzlers.

We all do it, but why do we do it? Why turn to comfort foods when we’re down instead of healthier choices like friends, activities, or exercise? Now I’m not saying that eating your feelings is totally wrong. Everything is ok in moderation, but the trouble is that it’s hard to moderate when crying your eyes out. Anything is bad in excess. I once went to the gym when I was absolutely furious with a guy friend, and I wanted to work out all my frustration and exhaust myself beyond the capacity to be angry. I ended up going top speed on an elliptical for almost an hour before throwing up. I do not recommend this approach. Why is moderation so hard when we’re upset? And why do we usually turn to food?

Well, food is something we associate with comfort at a young age. Kids are usually given a treat for being good or when they get a shot at a doctor’s office. This keeps going throughout our lives until it becomes almost an involuntary reaction. We know how certain foods make us feel, and we’ll crave that food to get that feeling. Usually women crave sweet things like chocolate, cookies, candy etc, while men crave pizza, steak, or casseroles. As we all know (or anyone that’s seen Down With Love), when women eat chocolate, it creates a similar feeling to when women are in love or having sex. This is why we turn to it when we’re blue; we seek that rush of chemicals that our body gives us when we feed it chocolate to make us happy. When we are stressed our bodies create increased levels of cortisol; one of the effects of high amounts of cortisol is cravings for food, specifically sweet and salty.

So most of the time, we’re eating to avoid actually dealing with our problems or our emotions. The best way to control this is to first realize the problem and what’s causing you to feel like you need/want to eat, and then to deal with that problem instead of eating. So, I guess I should start stalking Fall Out Boy and make sure they stay together right? Or… maybe a more healthy choice like listen to some other music and try to find a new band to love (yeah right, like I’ll ever love another band as much as FOB. But again, that’s a whole different rant for a different day). 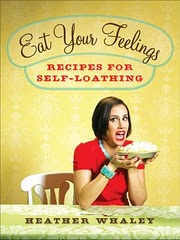 Also, check out the book “Eat Your Feelings” by Heather Whaley. It’s not only a great cookbook filled with comfort food, it’s also friggin’ hilarious–like, pee your pants cause you can’t stop laughing hilarious.

Oh yeah, laugh more! Laughter causes us to be happier, and happiness will help you beat off those blues. So watch the Daily Show with Jon Stewart or the Colbert Report or really anything that makes you giggle to help you kick your emotional eating habits to the curb.